Notre-Dame Cathedral in Paris is not the only cultural monument in the Ile-de-France region to have taken advantage of the expertise of famous architect Eugène Viollet-le-Duc. The Church of Saint-Martin in L’Isle-Adam was lucky enough to benefit from his expert advice in the 19th century when the gate, bell tower and Chapel of the Virgin were completely restored. It was thanks to Viollet-le-Duc that this Church of Saint-Martin in L’Isle-Adam, originally dating from the 15th century (1487), was transformed. Throughout its history, the building has been restored several times, particularly after a fire on Christmas night in 1661. In 1776, Louis-François-Joseph de Bourbon-Conti, the second-to-last Prince of Conti, built the chapel in the left side aisle, to house his father’s tomb. Louis-François de Bourbon-Conti was a great collector of art. The Prince’s heart can still be seen there today. 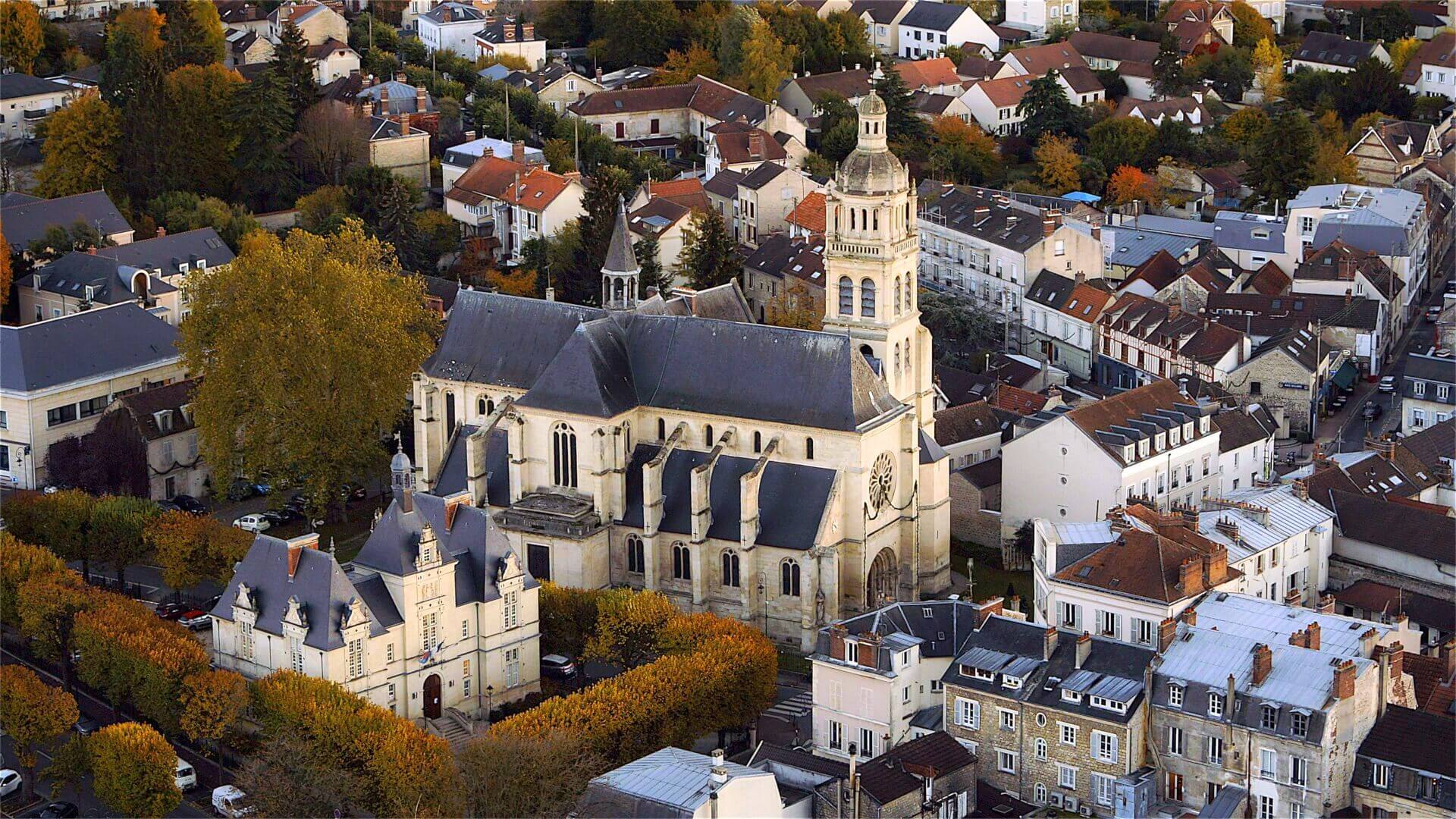 Did you say “Chinese”?  Thanks to the guided tours, expertly concocted by the guides from the Tourist Office, visitors can come and discover the mysteries of the Pavillon Chinois and unveil its secrets! The Pavillon Chinois was built in the 18th century, dates from 1785 and has been listed on the inventory of Historic Monuments since 1975. It was restored during the first year following this listing, and then a second time in 2008. It is only accessible for guided tours, to ensure it is preserved.

It can be found at the heart of the Domaine de Cassan and decorates the grounds of the château. According to legend, the plans for the Pavillion were drawn up by painter Fragonard and it is believed that he is behind the paintings in the rotunda.

When you are standing in front of this monument, you will be overcome by a feeling of peacefulness, a desire for meditation and elevation of the soul. The original and charming features all around the construction contribute to making this a calm place filled with curiosities. It is the ultimate symbol of the ornamental constructions of the Chinese-English gardens that were very fashionable at the time. It is an invitation to serenity….

Bookings are compulsory, through the Tourist Office 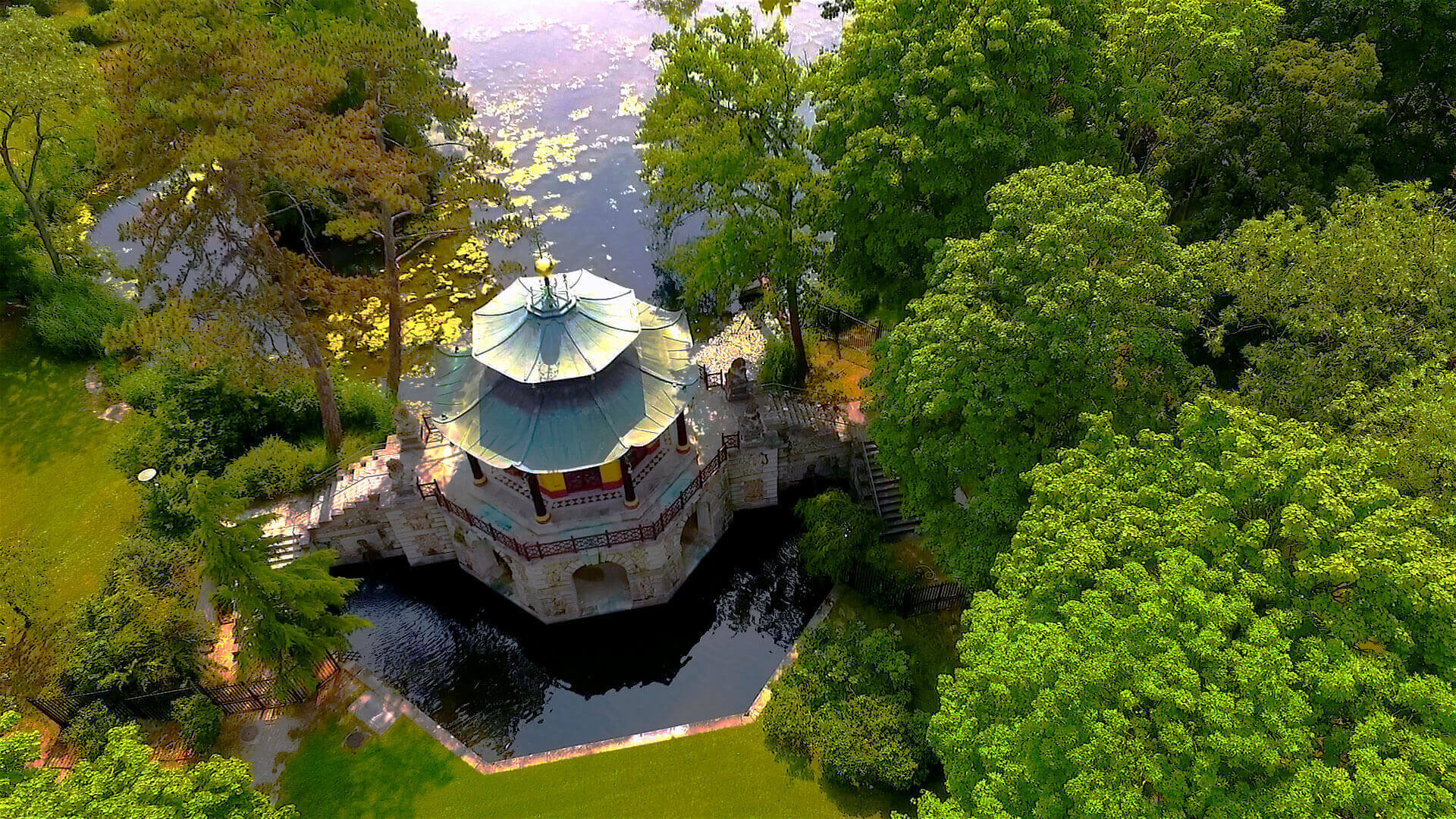 The biggest riverside beach in France is right here in L’Isle-Adam. lt dates back to 1910 and the very first beach huts, in the same style as the ones in Deauville, date back to 1920. At that time, this was the place to be seen. A great deal of celebrities came to this beach. It was right here that Mistinguett launched the pyjama trend at a charity fashion show.

It was a great seaside resort, with seven tennis courts, and bandstands with some Jazz bands from New Orleans.

Just imagine the fountains made with blue and white mosaics, and a wooden diving board known as “the Giraffe” for swimming in the river.

After the Second World War, thanks to the direct train service from the Gare du Nord in Paris, young Parisians began coming here for a weekend “in the great outdoors” and to have fun with friends.

It was four-times Olympic swimming champion Johnny Weissmuller, famous for playing Tarzan, who officially opened the “record” pool in 1949 with three diving boards, 3 and 5 metres high.

Over the past fifty years, improvements have been made to the beach and facilities, to meet the new tastes and needs of the public.

The beach has also been used as a film set. The first film here was “Rue des Pairies” with Jean Gabin, then “Partir Revenir” by Claude Lelouch. One of the latest films was “Le Secret” with Cécile de France and Patrick Bruel.

As soon as the summer season begins, the crowds flock to the beach and it becomes one of the main tourist attractions of L’Isle-Adam. The beach huts were renovated in 2015 and thanks to the two pools, one of which is surrounded by a sandy beach, the L’Isle-Adam Beach has so many activities on offer, a shaded picnic area with crazy golf, a water slide and so much more. It is still the place to be, not to be seen here anymore, but just to enjoy this exceptional heritage site.

To find out more:  ville-isle-adam.fr 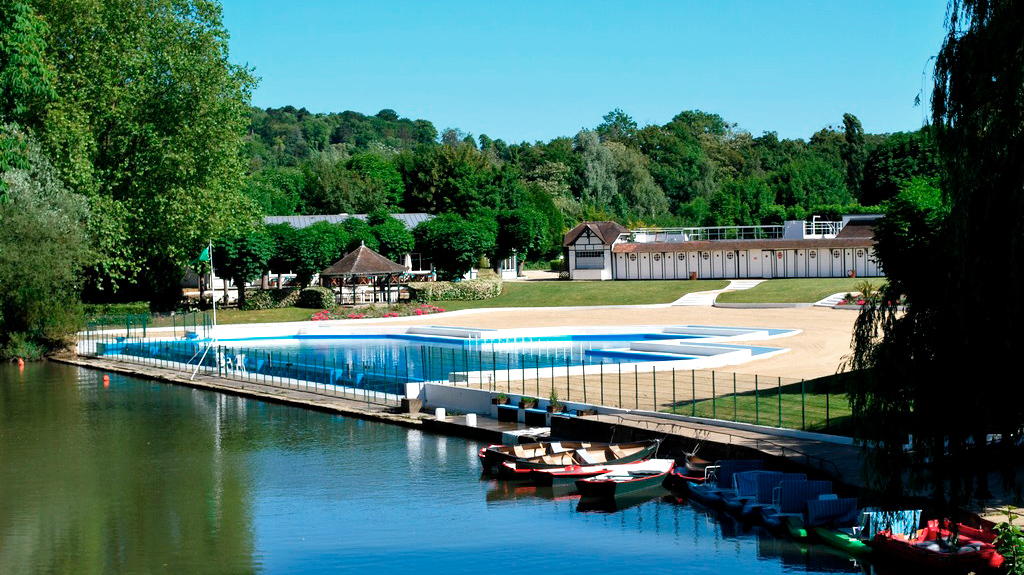 Joan of Arc herself is believed to have come here to pray at the Church of Jouy-le-Comte. There are two small crosses on one of the main flagstones to mark the place where she knelt. Construction work for the Romanesque church of Jouy-le-Comte (Parmain) began in the 12th century. The eastern parts of the early church were rebuilt just after the middle of the century. The different stages of this renovation work were spread over around fifty years. In the 19th century, the nave was completely redesigned and only the north wall was preserved. Inside, don’t miss the panelled vault that surrounds the church. 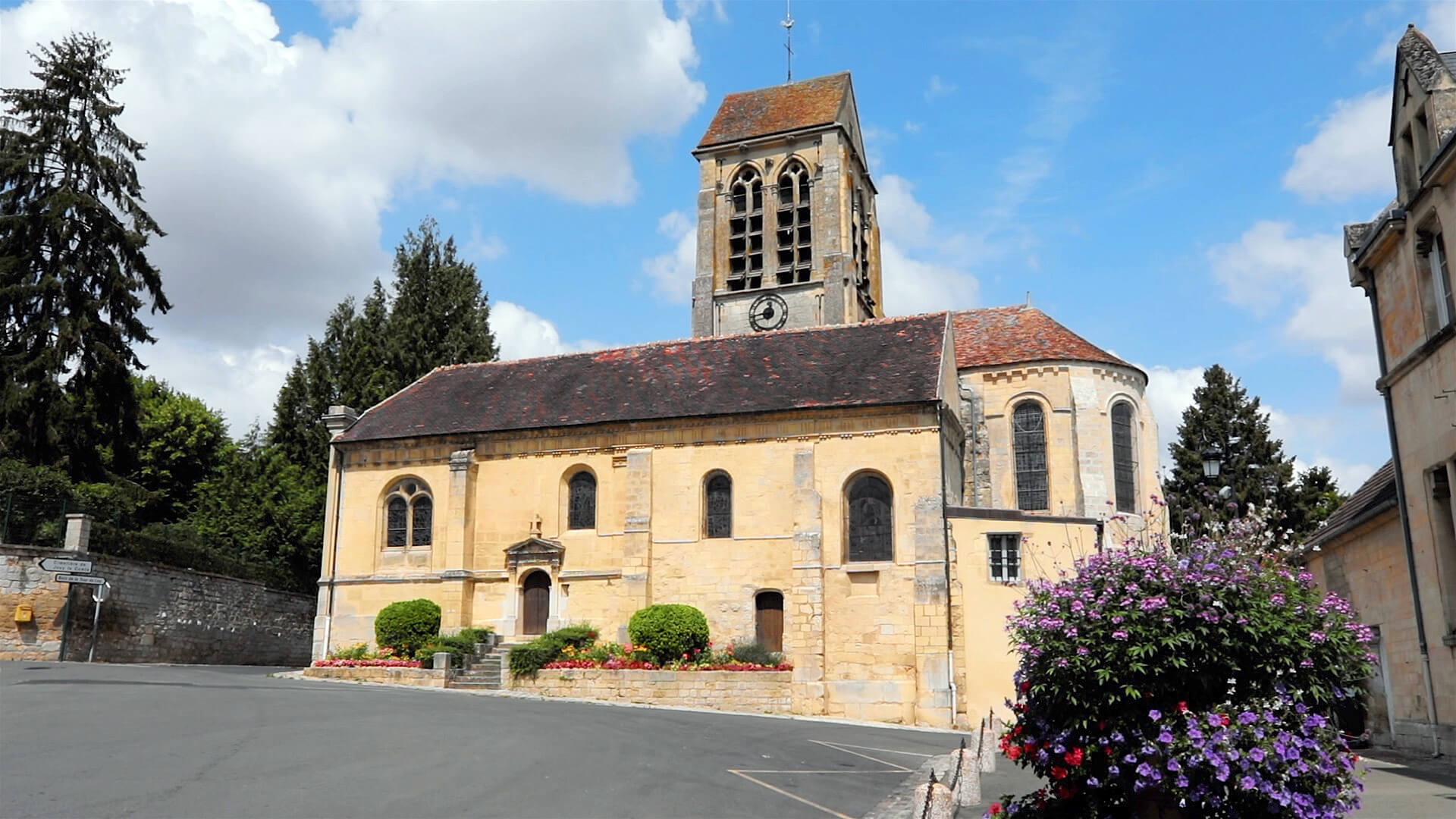 The Abbey of Notre-Dame du Val

The Cistercian Abbey of Notre-Dame du Val is the oldest foundation of its kind in the Ile-de-France region. It was built on territory of the towns of Mériel and Villiers-Adam, and building work began in 1125, more than a century before the neighbouring abbeys of Royaumont and Maubuisson. It was demolished and used for building stone in 1822, than again in 1845. Today, several buildings remain, one of which is one of the most beautiful Medieval monk’s dormitories in France.

The Abbey of Notre-Dame du Val has been listed a Historic Monument since 1947 for the monk’s building, and since 1965 for the rest of the buildings. 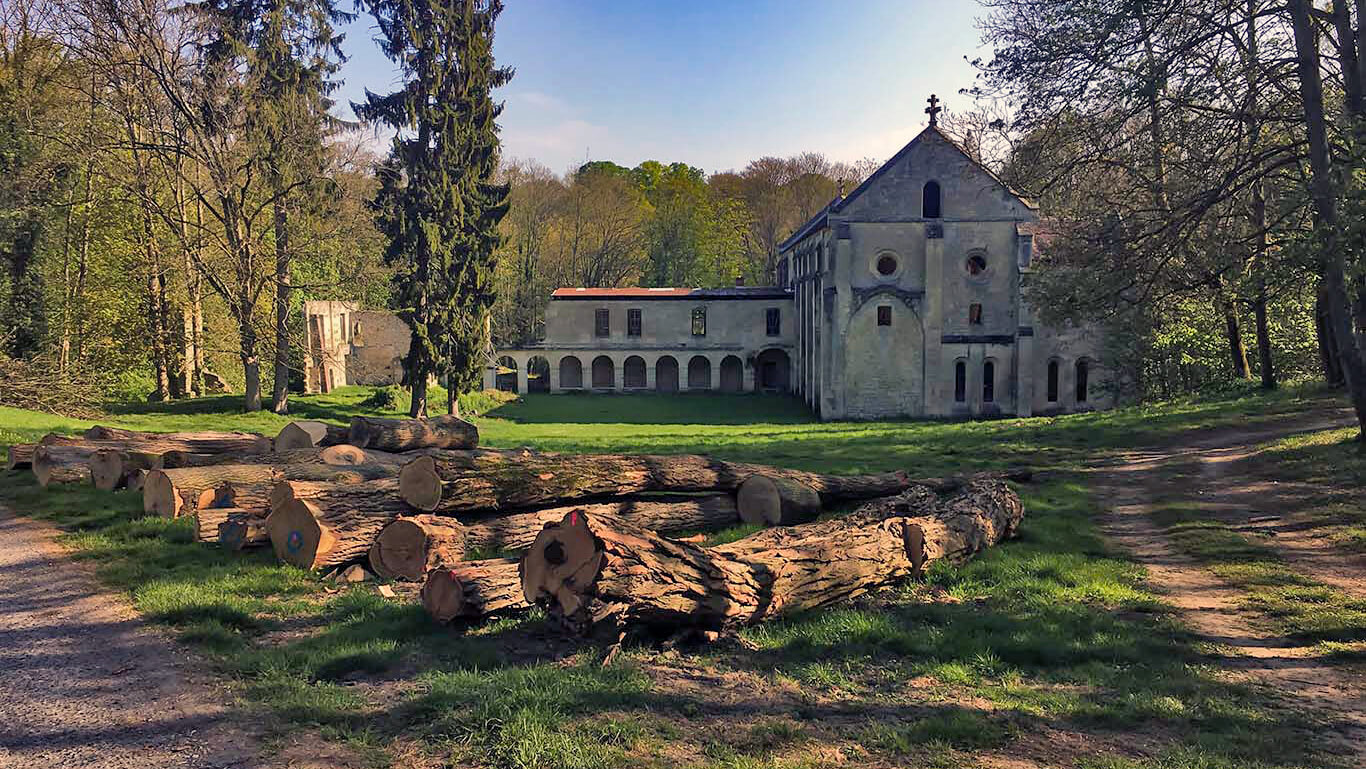 Some amazing remains of the Prehistoric era are still visible! In the Val d’Oise there are now only fifteen collective burial sites and eight menhirs due to the many destructions over the years, but these remains of the past are very impressive. Since 1800, at least thirteen covered walkways and five menhirs have been either dismantled or cut down into cobblestones. Prehistorians believe that there were at least three hundred collective burial sites in the department in Neolithic times. Among the unmissable megalithic sites are the “Trou aux Morts” in Parmain, the “Pierre Turquaise”, the “Blanc Val” covered walkway, the “Coffre Mégalithique de Bellevue” and the “Dolmen de la Pierre Plate” in Presles. 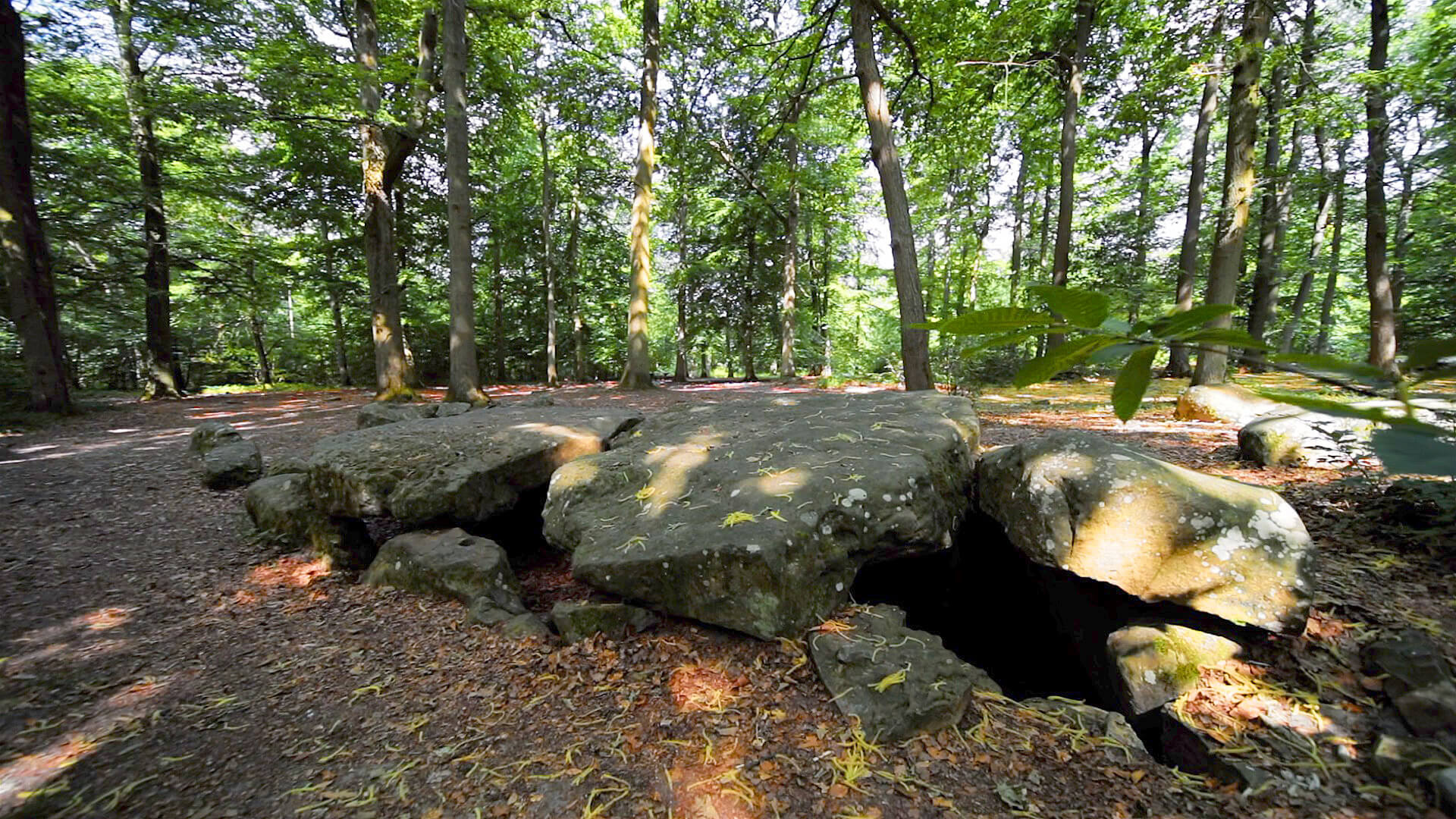 The remains of the Medieval castle drawbridge… Cabouillet bridge, listed a Historic Monument in 1936, was built in stone and dates back to 1500. It was built under Antoine de Villiers-Adam and is made up of three arches, one of which is not over the water because this was where the drawbridge once was. The word “cabouillet” comes from Vexin local dialect and means “rabouiller” in French. This expression refers to the act of stirring up the waters to make it easier to fish, carried out by the wives of fishermen, on the fishing boats with them. 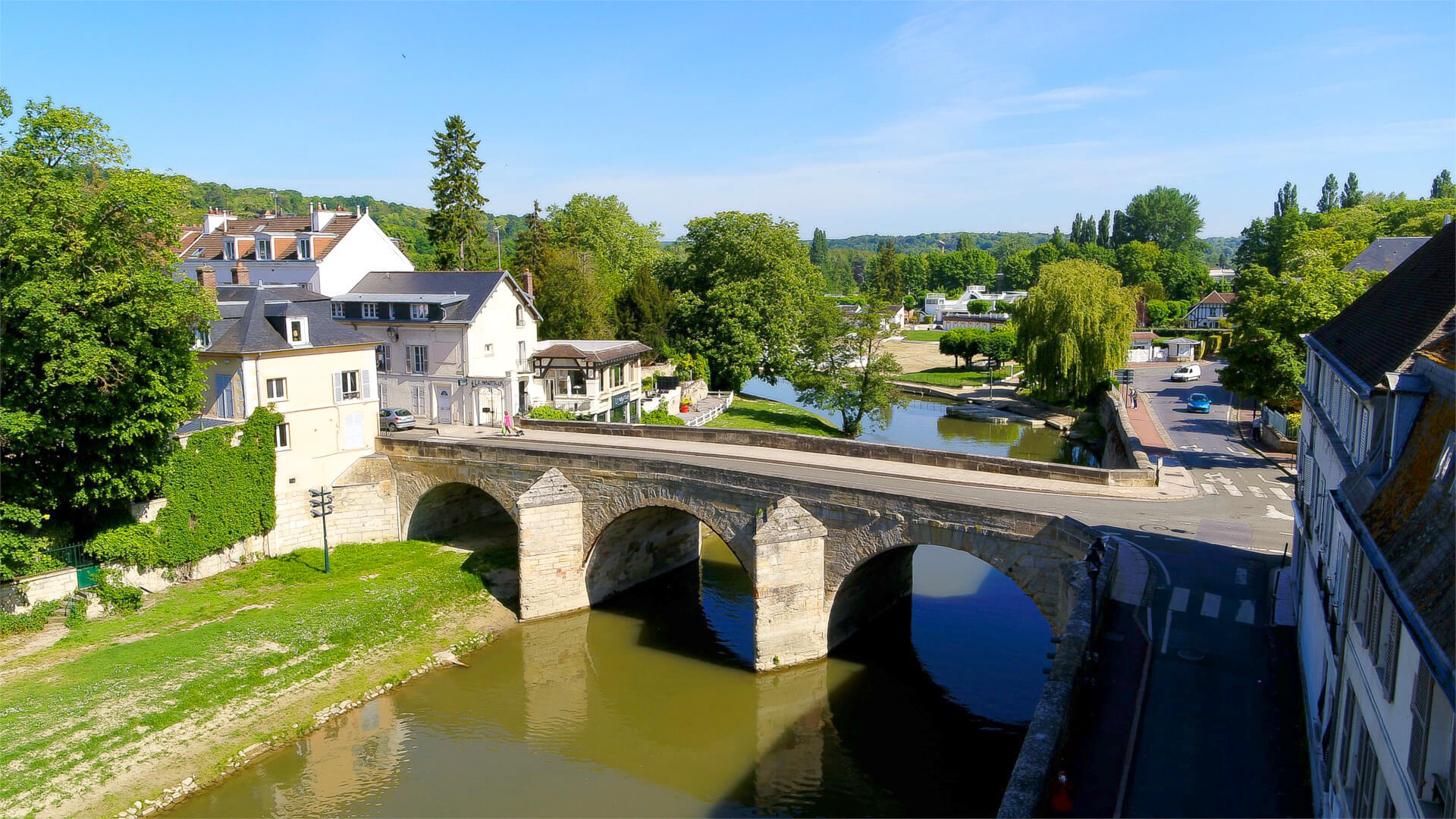 Restoration works to honour a relic of the past fallen into disuse. The village wash house was once the place where the women of the village would meet up, until the end of the Second World War.  When it was built in 1808, the wash house was overlooked by a stone building that collapsed. It was renovated several times (1860, 1887 and 1921). The construction wasn’t really put to use after the Second World War and it was vandalised on many occasions. The most recent restoration work started in 2009 thanks to the participation of ten young volunteers from the association “Rempart” (Restoration and Maintenance of Monuments of Artistic Heritage). Since then, every summer, they raise funds to replace the walls, the roof and the framework. The association “Mémoire d’Avenir” (association for the enhancement of Chauvry Valley) hopes that this place, which will be managed by the Town Hall, will eventually be able to welcome walkers, educational programmes and cultural events (small concerts, theatre productions). 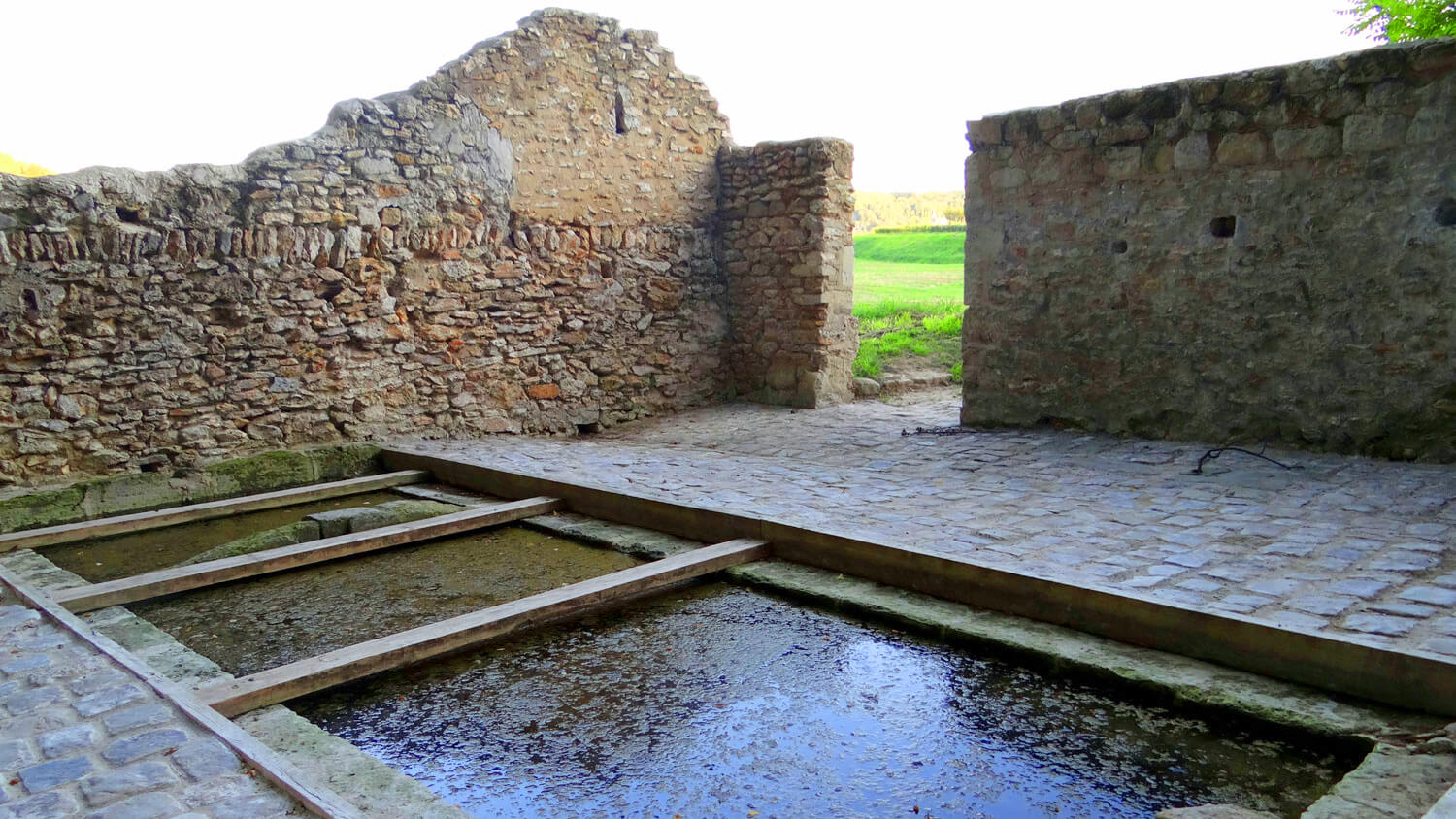 This place for washing hooves featured on a registry taken in 1833 under Napoleon! There is a curiosity in this village that has now become extremely hard to find, a place for washing the horse’s hooves so that farmers didn’t get the footpaths of the village dirty when leaving the fields with their animals. The fountain-drinking trough dates from the first half of the 19th century, features a lion’s head sculpted into granite and was used for horses to drink from after a long journey or hard work in the fields. From the Middle Ages right up until 1950, the main economic activities of the village were farming and chestnut wood (to satisfy the needs in wine-making). This place for washing hooves was made using limestone and is one of the last remaining examples of this type of construction in Île-de-France. This one in particular is quite deep and the horses could walk through the water.